W. B. Macdonald Oct 17, 2021 W. B. Macdonald
In 1889, in an obscure corner of the British Empire called New Westminster, a few dedicated lacrosse players and sportsmen put together a team of world-beaters. In today's era of manufactured teams with generic names, the New Westminster Salmonbellies stand with the old guard: the Yankees, the Canadiens, the Celtics and the Packers. The Salmonbellies were known as a tough team in a tough sport, as described by the "British Columbian" in 1894: "The men on both sides played a hard, fast game ? A few hard knocks were given and received, for lacrosse is no parlour amusement." The Salmonbellies became Canada's most successful pro field lacrosse team, capturing twelve Minto Cup championships between 1908 and 1924. The Salmonbellies' farm team, the New Westminster Royals, were Canada's greatest amateur field team, winning six Mann Cups between 1915 and 1924. In 1925 the Royals and the pro team were unified as the Salmonbellies, winning Mann Cups in 1925 and 1927 and representing Canada at the Olympic games in 1928. Less thn ten years later, in 1937, the Salmonbellies captured their first box lacrosse Mann Cup championship and have won thirteen since. A tradition of winning has made the Salmonbellies the world's most famous lacrosse team. In this first-ever, in-depth illustrated book about Canada's beloved national summer sport, MacDonald shares the stories of the players, their lives, their successes and heartbreaks, along with those of their greatest rivals. "Salmonbellies vs. the World" is a thoroughly researched and captivating story. With insight and humour MacDonald introduces us to legendary players, capturing both their accomplishments and personalities. On Jack Bionda he writes: "A month later Bionda scored two goals against Vancouver to reach six hundred career goals. Heading into the semi-finals against the Shamrocks, Victoria's program opined that Bionda ?Couldn't check his own mother.' ?Oh, I don't know,' retorted Bionda, ?Mom hasn't scored on me yet.'" And on L.A. Lewis, the goal-scoring sensation of the 1890s, MacDonald shares this story: "On July 15, 1893, in the fourth game of a match against Victoria at Queen's Park, L.A. Lewis was struck twice on the head by twenty-nine-year-old Harry Morton's stick. His second whack at Lewis knocked Lewis unconscious, ?blood spurting from a ghastly looking wound in his head.' As angry New Westminster supporters flooded the field, a dazed Lewis got to his feet and ran to Morton. The men grappled andLewis again fell to the ground insensible. Lewis was carried off the field and the club's physician, Dr. Fagan, dressed an inch-long cut in the side of his head, discovering that a small artery had been severed." The New Westminster Salmonbellies are truly iconic in the world of Canadian sport, and "Salmonbellies vs. the World" is a great read for all sport and lacrosse fans, from BC to Labrador and beyond. 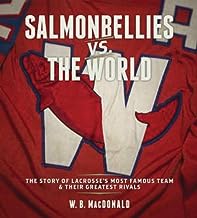